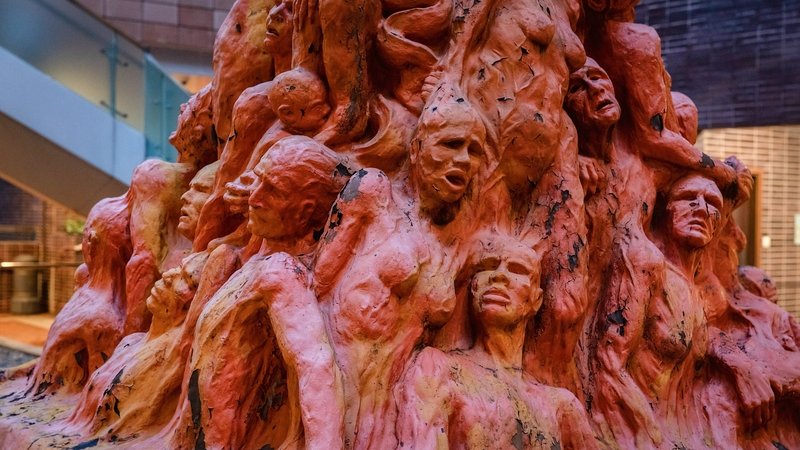 The Danish artist behind a Hong Kong sculpture mourning those killed in Tiananmen Square has instructed a lawyer to secure his work and bring it overseas after the city’s flagship university ordered its sudden removal.

The eight-metre high “Pillar of Shame” by Jens Galschiot has sat on the University of Hong Kong’s campus since 1997, the year the city was handed back to China.

It features 50 anguished faces and tortured bodies piled on one another and commemorates democracy protesters killed by Chinese troops around Beijing’s Tiananmen Square in 1989.

Last week Hong Kong’s oldest university ordered it to be removed citing “legal advice” as authorities crack down on dissent.

Mr Galshiot told AFP he had hired a local lawyer and requested a hearing with the university over the future of the statue as the deadline looms.

“I hope that my ownership of the sculpture will be respected and that I will be able to transport the sculpture out of Hong Kong under orderly conditions and without it having suffered from any damage,” he told AFP via email.

Mr Galschiot said he would prefer the statue to have stayed in Hong Kong. If it was destroyed by authorities, he said, Hong Kongers should collect “as many pieces of the Pillar of Shame as possible”.

“These pieces may be used to make some symbolic manifestation that ‘Empires pass away – but art persists’,” the artist said.

Mr Glaschiot said he had also been in contact with people in Hong Kong who were making 3D scans of the sculpture to produce miniature versions.

The University of Hong Kong said it was “still seeking legal advice and working with related parties to handle matters in a legal and reasonable manner”.

Mayer Brown said the university was a long-standing client who was being helped to “understand and comply with current law.”

“Our legal advice is not intended as commentary on current or historical events,” a spokesperson told AFP.

Hong Kong used to be the one place in China where mass remembrance of Tiananmen’s dead was still tolerated.

However the city is being remoulded in China’s own authoritarian image in the wake of huge and often violent democracy protests two years ago.

Scores of opposition figured have been jailed or fled overseas and authorities have also embarked on a mission to rewrite history and make the city more “patriotic”.

Many of the alliance’s leaders have been arrested over the last year and the last two vigils have been banned with authorities citing the coronavirus.

Officials have also warned that commemorating Tiananmen could constitute subversion under a new national security law that Beijing imposed on the city last year.

A museum run by the alliance was also raided and shuttered, its exhibits carted away in police vans.